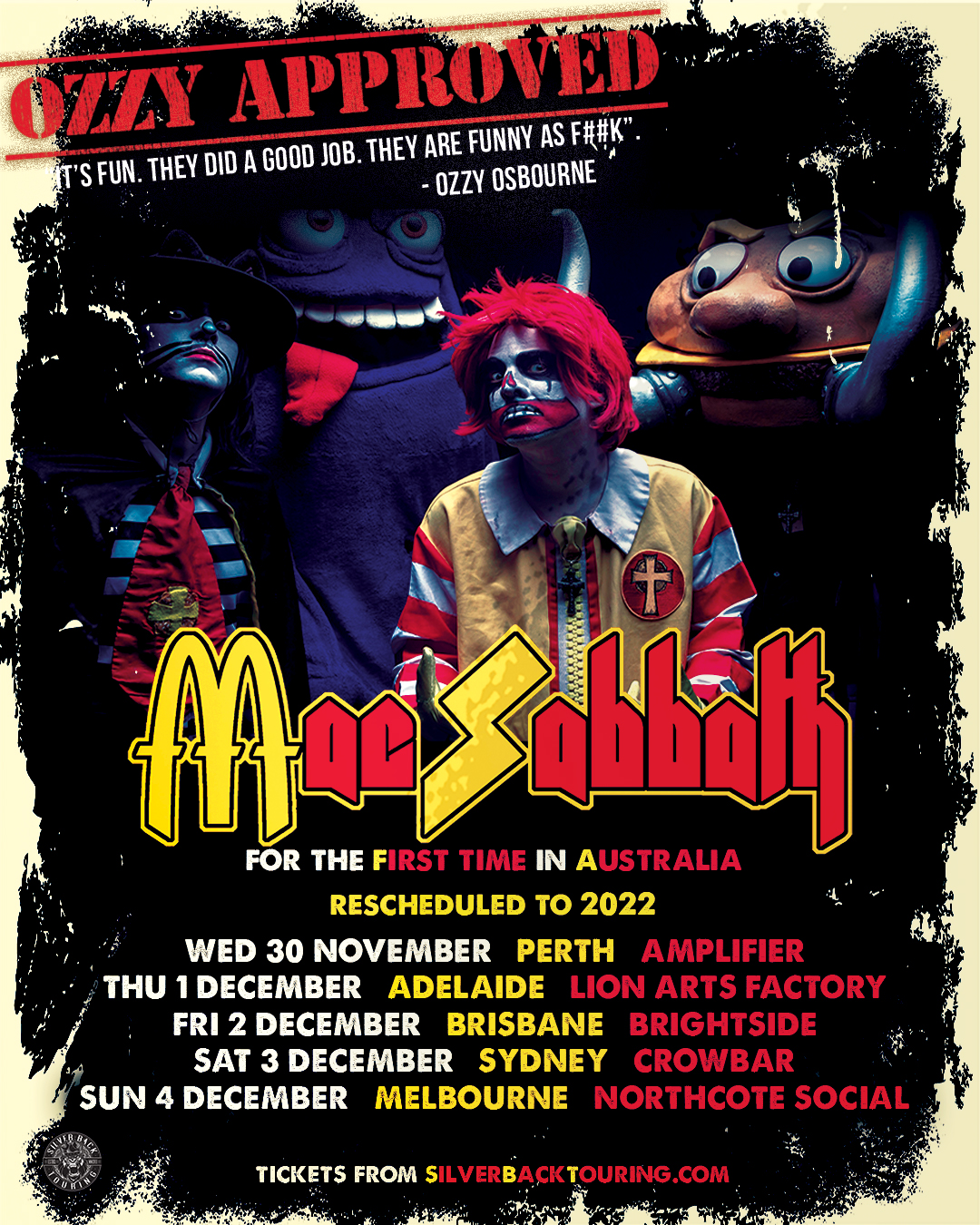 MAC SABBATH
FOR THE FIRST TIME IN AUSTRALIA

Due to the ongoing issues with international border closures, we have to unfortunately postpone the first ever Aussie tour for the founders of Drive-Thru metal, Mac Sabbath.

Please hold on to your tickets. If you cannot attend the new dates, you may seek a refund from the point of purchase, subject to some processing conditions.

We thank you for your continued support.

Is there any better combo than Black Sabbath and Burgers? Thanks to Silverback Touring you are about to get a taste! MAC SABBATH are headed our way for a tour with the lot!

The founders of Drive-Thru Metal MAC SABBATH were founded in a franchise of a certain multinational fast food conglomerate (which shall remain nameless) in California, the home of fast food in 2013 and fronted by the bright yellow and red costume, giant shiny shoes wearing Ronald Osborne. There is something very familiar looking about Mr. Osborne.

Some of the delinquent kids who worked for the franchise had been allowing him, Ronald and a cast of characters named Slayer Mac Cheeze, Grimalice, and the Cat Burglar, to perform secret rock shows in the bunker-like basements of the local restaurants. But after a succession of these shows, the time had come, to bring drive-thru metal up from the “underground”.

People’s eyes and taste buds were tingling to a new sensation. Drive-Thru Metal it was real and talk about a feast for the senses! Black Sabbath’s music, hilarious fast food lyrics, smoldering clown heads with laser eyes, a giant purple gumdrop bass player, and Tony Iommi with a giant cheeseburger head. People were confused, amazed, and dare they say it, they can’t ever remember feeling so………happy after seeing the band.  MAC SABBATH refuse to reveal their identities because they think they came here from a wormhole in time direct from 1970. But whoever they are and however they got here, they’re here now and they’re ready, so pull up to the window and check your order, because we are proud to present the world’s newest concept in entertainment, the culinary disgrace that is MAC SABBATH!

We will leave the last word to Ozzy Osbourne. “It’s fun, they did a good job, they are funny as f*^k”.