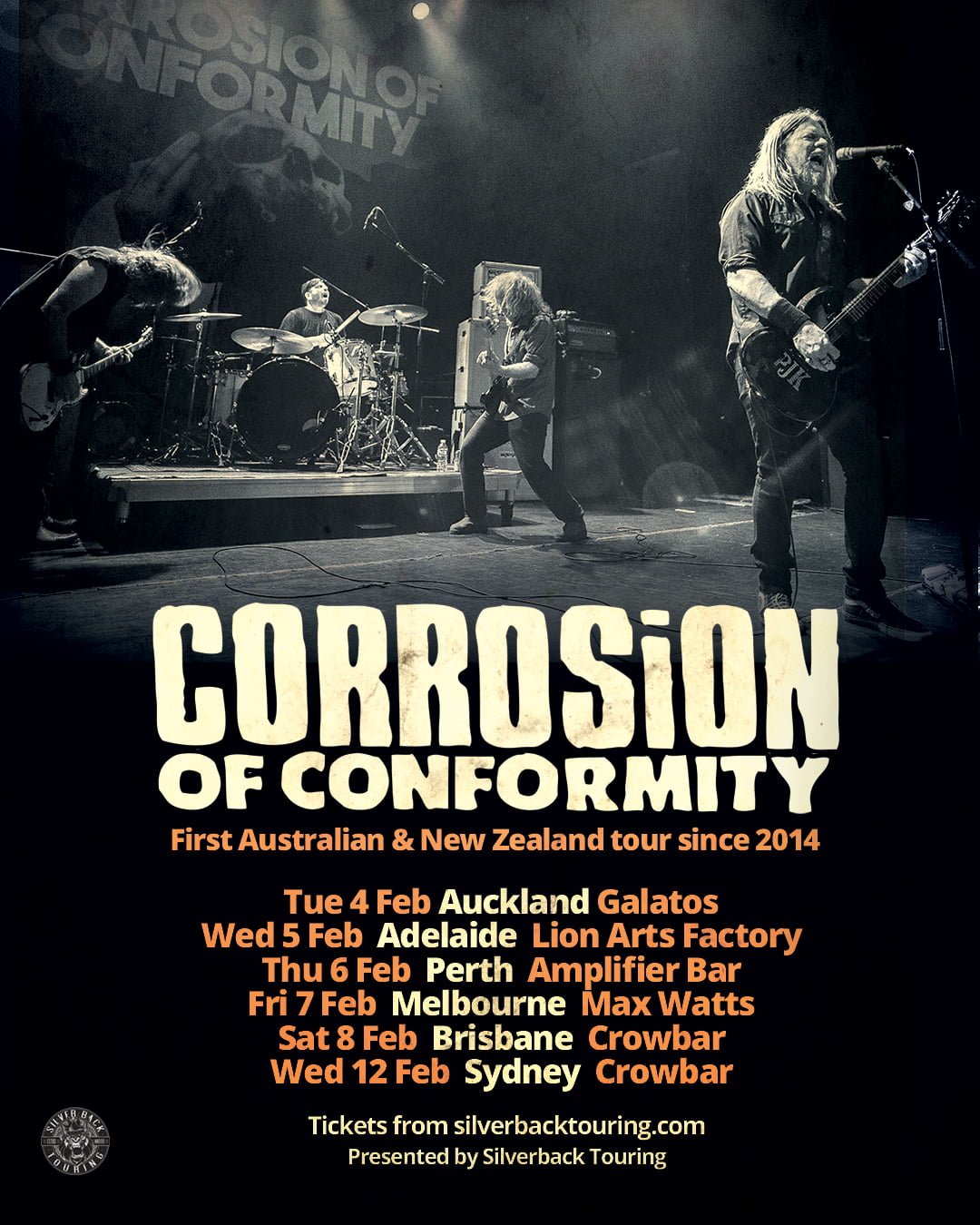 The Rock world was abuzz with the news that Pepper Keenan was headed back to his old stomping grounds and recording his first album with Southern Rock legends CORRISION OF CONFORMITY in 13 years. The result was an absolute stormer of an album ‘No Cross No Crown’ and their first for Nuclear Blast, the album cracked the Billboard Charts, The UK Charts and Australia’s own ARIA Charts heralding a triumphant return. Now thanks to Silverback Touring CORRISION OF CONFORMITY are headed our way again with Pepper up front.

In 2014, after nearly a straight decade traversing the globe as a guitarist with New Orleans supergroup DOWN, Keenan reconnected with the core C.O.C. trio of Woody Weatherman, Mike Dean and Reed Mullin to hit the road hard. After a long run of touring and writing the end result was ‘No Cross No Crown’ an album that somehow sounds as though no time has passed between 2005’s ‘In The Arms Of God’ and today. Some of these new jams sound like they could’ve easily been on ‘Wiseblood’ or ‘Deliverance’, two of C.O.C.’s most revered records.

On ‘No Cross No Crown’ beefy Southern stompers like The Luddite, Little Man and Forgive Me are interspersed with melancholy guitar interludes like No Cross, Matre’s Diem and Sacred Isolation - just like SABBATH used to do in the ’70s.

CORROSION OF CONFORMITY are going to give you what you expect. A Southern flavoured, beer soaked, sweat drenched, smoke filled riff fest with a set list offering new tracks alongside all time classics like Vote With A Bullet, Cleanse My Wounds, Albatross, Wiseblood and Seven Days……

‘’Their tone was huge and warm, pushing a stadium-level and Keenan’s patented overdrive cut through the mix.’’ – Consequence Of Sound

‘’Reinforcement of the heavy Southern groove that’s helped make C.O.C. an institution for the last however many decades. After all the righteousness that preceded them, it was their show without question, and they delivered on any level of expectation and then some.’’ – The Obelisk